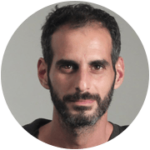 Eitan began his career as a professional director of photography in 2006, and enjoyed overnight success as several of his early music videos for Israeli artists like Asaf Amsursky, Esther Rada, and Kutiman garnered extensive exposure in Israel and abroad.

Alongside his professional work, Eitan began studying at the Sam Spiegel Film and Television School in 2009, where his short films were twice awarded for excellence in cinematography. Since graduating, he has added commercial work to his  portfolio and is now shooting commercials for clients like Mazda and Strauss (Israel’s largest food and beverage company.