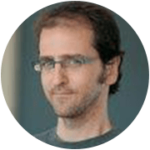 Ziv’s connection to the world of film began with his first loves - music, melody and rhythm - and how they combine in film.

A graduate of the Tel Aviv University Film School, Ziv has been a professional film and video editor since 2001.

He has edited dozens of commercials for major Israeli and international clients, including Kinder, Huggies, Kotex, AIG, Arkia Airlines, and Delek Fuel.