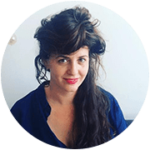 Netta Dror is a visual artist and a production designer for film and television.

She began working as a professional art designer in 2008, and has worked on feature films, commercials, television shows, music videos, photo shoots, and stage productions.

Netta Dror holds a Bachelor's Degree in Film from the Sapir College and is currently working on her Masters in Art Theory at the Bezalel Academy of Arts and Design.